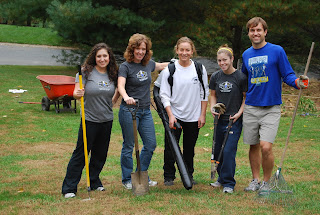 
Saturday, October 24th 2009 was National Make a Difference Day and the UCF office wanted to get involved. We decided to do our part in making a difference on Friday the 23rd. One of our clients needed some help in his yard and we knew just who to call.


Rock star volunteer, John Beck, donated his time on the 23rd, his equipment, and lots of resources. 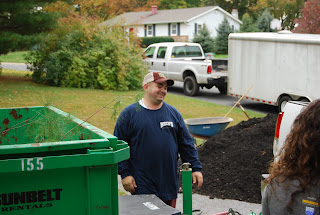 UCF is thinking of taking up part-time landscaping to bring in some extra money to the fund. We are now nearly professional leaf rakers and baggers... 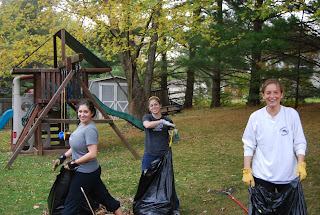 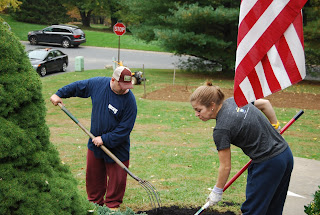 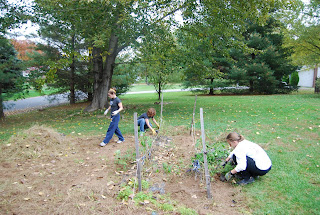 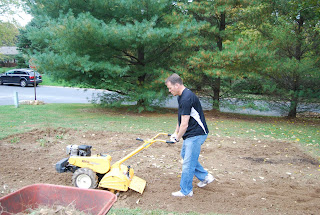 With a special expertise in wheelbarrow pushing... 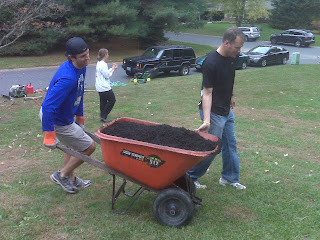 For more pictures of the UCF Make a Difference Day, please visit our Facebook page!

Just because the men in purple are out of town, doesn't mean you can't watch the game with friends, good food and free Miller Lite and house wine! 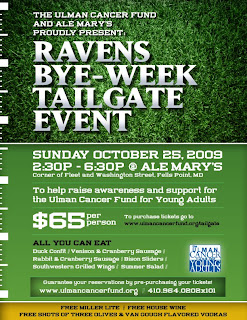 Check out the Animoto 30 second short for the event too!
Posted by Ulman Cancer Fund at 10:12 AM No comments:

So You Think You Can Dance honors the fight of breast cancer.

Last night at the 1st Mariner Arena, I saw the So You Think You Can Dance (SYTYCD) Tour perform. Your first reaction may be, "dork!" And for those of you who don't know me well yet, you're probably right about that.

However, the show was PHENOMENAL. After a day of travel to DC for George Washington's Survivorship Symposium I was all "learned out" and ready to sit and watch some fantastic dancing. I got that and more. These dancers are authentic athletes and beautiful performers.

A huge fan of the arts, with a personal history of 18 years of dance classes and performing, I had been anticipating this year's SYTYCD stop in Baltimore greatly. 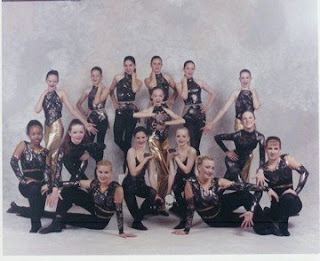 Could you find me?

And here are the REAL dancers... 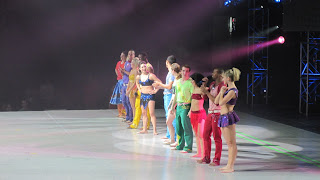 The SYTYCD dancers performed favorite dances from the season along with comic dialogues. Most notable and relevant for this month (Breast Cancer Awareness Month), two dancers performed a piece choreographed by Tyce Diorio. The piece was a tribute to one of his dear friends fighting breast cancer. Melissa and Ade dance to "This Woman's Work". The dance was prefaced with a clip of Tyce explaining his connection to the fight. He talked about wanting to give his friend hope, and something to fight for.

He certainly succeeded. Please take 2 minutes of your time to watch this gorgeous and incredibly moving tribute:

(This is video from the season 5 TV show and not my own personal video. I was so excited when the dancers came on stage my digital camera video is too shaky to make you suffer through!)

Pre marathon margaritas and other stories from Baltimore Running Fest...

The Ulman Cancer Fund for Young Adults had approximately 50 runners in the Baltimore Running Festival this past Saturday, actively fighting our battle against cancer. We are so proud to have had TEAM FIGHTERS compete in ALL events: 5K, half marathon, relay, full marathon. Also, we had the children of TEAM FIGHTERS in the kid’s fun run!

Shelby Orndoff, UCF’s Scholarship Program Manager participated by completing her first marathon. Here is an excerpt of her experience…

“Basically this was my first marathon. I figured I had done a 5K and Survivor Harbor 7, so I lost the floaties and decided to dive head first into the shallow water. Running a marathon was a "bucket list" item for me and it helped that I was running for a good cause! I've met people both through UCF and my work as a nurse who would love to be out there running and can't. I was running for them. Each step and each mile was for anyone who ever fought cancer, has cancer, or has lost someone to cancer. I wasn't running to the finish line looking for a cure. Running those 26.2 miles and crossing the finish line was my way of never losing hope. From someone who couldn't run 5 miles a year ago, to running 26.2 miles – I’m sure that anyone can beat any obstacle.

The night before the race I attended the Team Fight pasta dinner at Frank and Nic’s. I had a margarita (as Kelly teased me about yesterday in the UCF office) to take the edge off... I should have had 5 more! I didn't sleep much the night before the festival and despite knowing better my nerves got the best of me. I got sick 5 minutes before the starting whistle! Aches and pains kicked in fast - I never lost or became short of breath, but from waist down my body was numb. Mile 17 I had my moment of breakdown. But, I kept chugging and when I saw Camden Yards I couldn’t have been happier. Post race I ate like a teenage boy and could barely move! But it was worth it. Now that it is a few days later, I can't wait to run it again next year! Kick cancer's butt all around Baltimore!” 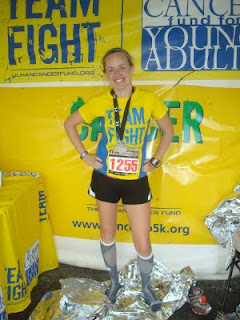 
The Cancer to 5k program, is an idea that developed out of the personal experiences of Holly Gannoe-Shoemaker while she underwent treatment for cancer. Holly is a 3-year Nodular Melanoma Survivor. The encouragement to move forward with this idea came through Holly's participation in the Inaugural LiveSTRONG™ Summit held on October 28-29, 2006 in Austin, TX by the Lance Armstrong Foundation.

Many cancer Survivors finish treatment, are given the "all clear" from their treatment team and then find themselves asking, "what next?" The feelings of uncertainty and anxiety and stress that often follow the end of treatment along with the physical changes that can result from some forms of treatment (weight gain/loss, fatigue) are not uncommon. Exercise is a known way to reduce stress and feel less tense. Regular exercise increases your sense of well-being after cancer treatment and can speed your recovery.

For more information on Cancer to 5k


UCF is so proud of its Baltimore Running Festival participants and thanks them for sharing their stories. KEEP FIGHTING!

Posted by Ulman Cancer Fund at 1:44 PM No comments:

Thank you so much to our friends, family, long-time supporters and especially new faces who came out to our 2nd annual SCREW CANCER event at Looney's and helped us to toast to life! With help from our sponsors, Underdog Wine Merchants and Dogfish Head Brews, along with the entertainment of Garrett Anderson and Rew Smith we were able to celebrate the mission of The Ulman Cancer fund for Young Adults.


This year we changed the feel of the event and created a more casual, laid back evening that catered towards the young adults we support! With the generosity of Looney's Pub we were able to attract new people to our cause. If SCREW CANCER was your introduction to The Ulman Cancer Fund for Young Adults we hope to maintain your support.


The evening would not have had such an impact without our special guests. Amanda Pope, a recent Thyroid Cancer Survivor and a Young Adult Alliance Panel Member eloquently told her story about the "best" kind of cancer. 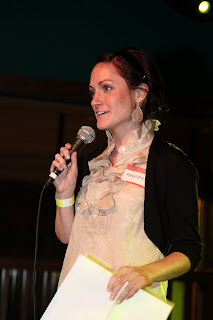 A returning guest and young adult cancer survivor, Jonny Imerman, made a special trip to Maryland for our event. His organization Imerman Angels provides one-on-one support connecting cancer fighters, survivors, and caregivers. Jonny spoke about the importance of partnering in the cancer community. 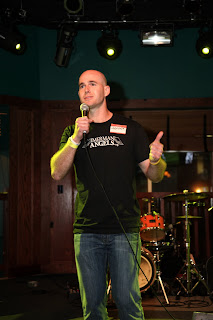 That evening we were also able to honor and present a check to our Martek Biosciences Corporation Scholarship Award Winner, Hayley Grist, a Pharmacology graduate student at the University of Maryland. 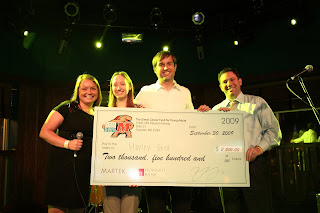 Thank you again for all those who made SCREW CANCER a fun and successful night, your continued support is invaluable to The Ulman Cancer Fund for Young Adults! 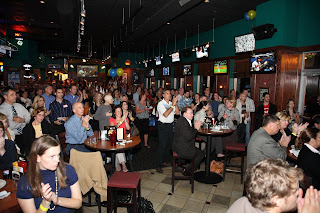 More pictures from the event

You might wonder what Miss Piggy, Kermit the Frog and James Denton have in common. No, it isn't Lady Gaga!! 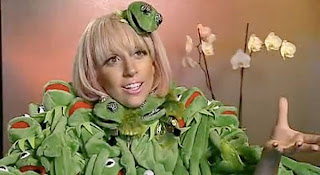 All three celebrities (Kermit, Miss Piggy and James Denton) appear as advocates for Disney's Give a Day Get a Day program.

Beginning January 1, 2010 if you give a day of service with a participating organization you get a free day at Disney World or Disneyland! There are few places in the world more magical... Disney's goal is to inspire 1 million people to give a day of service! How great is that?


If you would like more information about Give a Day Get a Day, check out Disney's site:

Give a Day Get a Day


Or, if you don't want to wait until January contact Sarah ( sarah@ulmanfund.org ) for volunteer opportunities at The Ulman Cancer Fund for Young Adults.

Posted by Ulman Cancer Fund at 11:23 AM No comments:

"When you pitch in for someone else you will benefit more than you think. Contribute to your community in any way and you will literally make yourself healthier. Do good for others and feel better about yourself, you'll be improving lives while enhancing your own health every day."


iParticipate is a website that collects volunteer opportunities based on location. It is a movement supported by many celebrities and public figures including Ashton Kutcher, Michelle Obama, Matthew McConaughey, Gwyneth Paltrow, and Jill Biden. Go ahead, check it out! 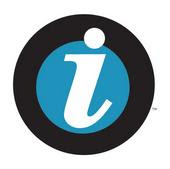 What do you think about their stance on volunteering? Can it make you a healthier person?
Posted by Ulman Cancer Fund at 8:50 PM No comments: 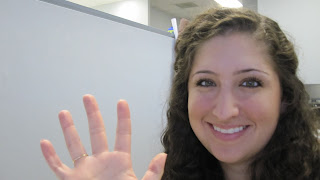 Hello! I wanted to introduce myself. My name is Sarah Wainio, and I am The Ulman Cancer Fund’s newest staff member. I came to UCF by way of AmeriCorps’ program Volunteer Maryland. I am so excited and honored to be able to help with UCF’s mission to empower young adults, families and the community to take control of their cancer experience.

Here you can find more information on AmeriCorps and Volunteer Maryland:

A little background on me… I’m a recent graduate from Fordham University in New York. I graduated from Fordham with a Bachelors of Science in Psychology and a second degree in Philosophy. I have a long history of volunteerism, including volunteering in Thailand and Israel. I also worked in volunteer management at the public radio station WFUV 90.7. Now that I’ve finished school I feel a very strong connection to spending time volunteering in my own community.

During my 11 months here I will be working to recruit, energize, and recognize volunteers. If you are interested in hearing about our volunteer opportunities at The Ulman Cancer Fund for Young Adults please contact me at

Also, keep in mind that October 24th is National Make a Difference Day! Start thinking about how you can help now!

Columbia Triathlon Association's Rob Vigorito is Half Full! Are you?

Are you ready to race the Vig! Watch the video to learn more...

http://www.halffulltri.org/
Posted by Ulman Cancer Fund at 8:00 AM No comments: