The blog where I play catch up...

The National Marathon: my first race! It was a huge personal accomplishment. As I’ve mentioned before, I was not running for time. My goal was to finish. And, ok, it wouldn’t have hurt to make a 12 minute mile.

I decided to do the race after I had been working at the UCF for a little over 3 months. It was the start of 2010 and one of my resolutions. I embarked on the journey without enthusiasm. I felt a certain obligation to sign up for a race because I am working at an organization with a brilliant athletic fundraising and training team, and it is also a step in the right direction to taking better care of myself.
Running is not my forte. I dredged my feet through the “Couch to 5k” training program starting with 1 minute running intervals. Gradually, by mid-March I had increased my stamina and was running for 30 minutes straight. I didn’t enjoy the process; each thud of my foot held the thoughts: “ow”, “I want to stop”, “how many more minutes”, “it wouldn’t be so bad to cut my jog short today...”. Yet at the conclusion of each run the feeling of pride (and soreness of using new muscles) was enough to motivate me to hop back on the treadmill or track for the next workout.
On Saturday March 20th I arrived at RFK stadium with my relay team members, Lindsay and Carrie. I was nervous. A trembling, heart racing type of nervousness that left me unable to eat my breakfast and made me hesitant I would be able to run without tripping. 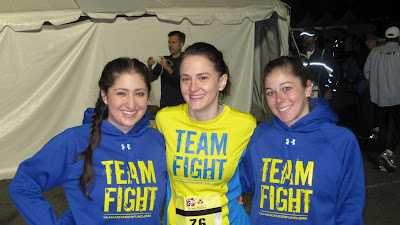 Sarah (me), Carrie and Lindsay at 6:30am. GOOD MORNING!
In 2002 Carrie ran the National Marathon in memory of my sister, Honor Elizabeth. As the three of us met the other Team Fight members who would be running Carrie prepped me on what I could expect from the course. At the start line there was music and a buzzing, growing energy that was palpable. People were clapping and dancing as the sun was rising. We watched Lindsay, our first leg, take off and I knew it was time to put aside my fears. I was here, I was going to finish and I was going to try to enjoy it. 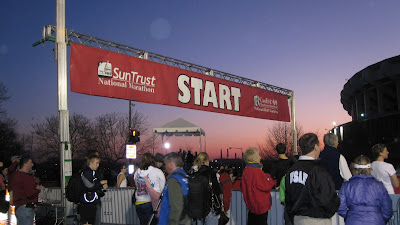 Two days before the race I met Amber. With Amber in my mind and my sister in my heart, I got myself to the second relay exchange point. Then I just had to wait. The exchange point was at the top of a hill.  I was able to look down (while trying to bounce out my nerves and stretch on the curb) to see the yellow Team Fight shirts as dots in the distance. The first group of Team Fighters passed and I cheered for them. 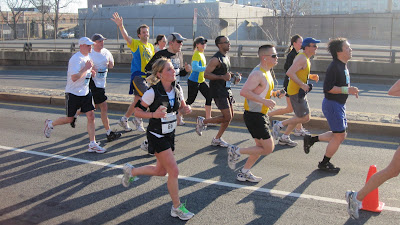 Brock and Katrina at mile 10 of their half marathon and my relay exchange point.
It was fantastic. Everyone there wants you to succeed! People were shouting sentiments of encouragement and clapping. The positivity I felt that day I have rarely seen at other sporting events.  Finally, I spotted a yellow shirt and gray pants coming toward me and I knew I had to get in the zone. Carrie and I kissed on the check (no scrunchie\baton pass off for Team Slow and Steady) and I was off.
Because I tend to look down while I run (bad habit) compounded by my nerves, I didn’t have a clue where I was in the course. I missed every mile marker! There was a point where I started to get tired. REALLY tired. I didn’t want to walk, but the shin splints were there and they were real! This happened to be the time I was running parallel to the full marathoner's mile 13. All the sudden I see Team Fight members Katrina, then Danny, then Mike! It was so exciting to watch my friends and UCF supporters cheer me on I remembered the people I was running for. I remembered how unbelievably strong these people are and were. I pulled from their strength. I kept running.
Crossing the finish line that Saturday morning I felt a something melt. This layer of “I can’t” and “I’m scared” disappeared into, “I DID!”. I am very happy to have finished 3.1 miles in 31 minutes and 36 seconds!
Running the race wasn’t easy for me, but I found the time set aside with just my thoughts to be very rewarding. 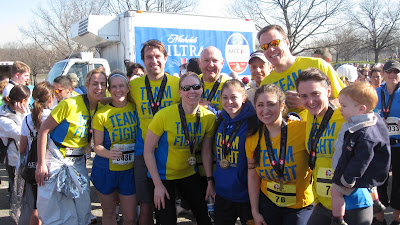 Almost all of the Team Fight crew after their respective runs.
Since the race I sent out a request to our supporters for help with Amber. I am so grateful for the people who contacted me. Not only were the donations generous, the correspondences were also a true pleasure.
I was fortunate enough to be able to visit Amber at hospice (temporarily inpatient due to an infection) two weeks ago. We surprised her with a visit from Mimi’s favorite TV character, Dora the Explorer. If I thought I felt connected to Amber before this day, I was irreversibly changed watching her interact with her daughter. The dynamic between Richard, Mimi and Amber is absolutely delightful. Amber spoke Spanish to Mimi as her shock turned into joy when the giant television character materialized in her mother’s hospital room! The purpose of the visit was to bring Amber's family gifts, however I feel I was given a gift to be able to share some of what is left of Amber's time. 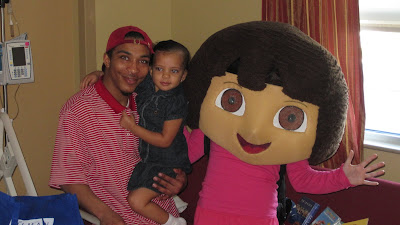 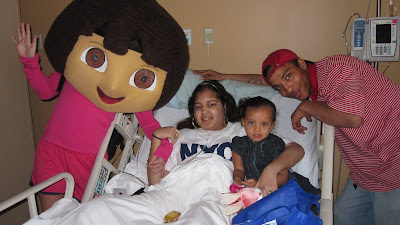 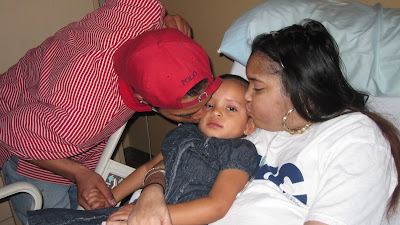 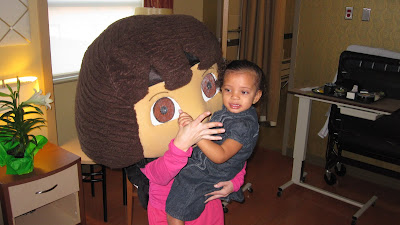 The blog where we remember a mother and her impact... 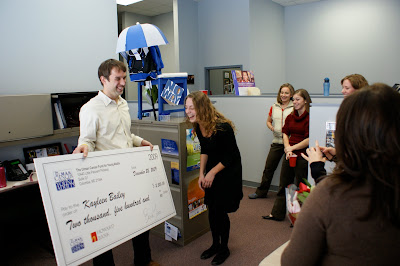 Brock and the staff presenting Kayleen with the Marilyn Yetso scholarship check, 12/2009.
Growing up playing sports – from little league to college soccer – I always thought winning WAS everything.  Yeah, yeah…some coaches and your parents might say winning isn’t everything and “how you play the game” is equally important --- I never really bought it.  You see, I was a soccer player and goalkeeper at that, so at the end of a 90 minute game, if I gave up more goals than the opposing team, we lost!  As I moved along in life, I applied this “winning” philosophy to much of what I did and saw pretty decent success – both on the soccer field, in the classroom and in the business world….little did I know and would learn later, winning is NOT always everything and “how you play the game” is sometimes more important.  The way you play the game is what makes the people around you better and stronger and leads to longer lasting success.
So where am I going with this.  In March of 2000, my family and I faced the hardest opponent any of us had ever seen.  This opponent wasn’t an opposing striker, a difficult test or a high stakes meeting – this opponent was CANCER.  Cancer humbled me and turned my life upside down.  On the surface you’d probably say it won – but over the years I’ve learned it was far from winning and I’m still in the game FIGHTING right back!
On February 17, 2000 my mom was diagnosed with Stage IV Colorectal Cancer.  She was 57 years old at the time, had been a nurse for 20+ years and experienced no symptoms.  She was a loving wife and mother of 5 kids and living her life in a way people could only aspire to imitate.  Her youngest son was about to be the last of five to graduate from high school and her oldest daughter was a few months from getting married.  She had so much to live for and the world had so many reasons for her to live.  The PTA President, Soccer mom, community leader, health care professional and more – she lived a life of service and compassion for others.
My mom’s cancer journey was a short one – from her diagnosis in the local ER she received immediate surgery followed by chemotherapy and radiation.  Unresponsive to any treatments, we to took her home from the hospital four weeks after her diagnosis on March 16, 2000 where she died peacefully in her home with her family by her side on March 17, 2000.
Today as I sit back and reflect on my mom’s life, her cancer fight and how it has impacted me and how I live my life, I go back to my initial thoughts I shared with you about winning, losing and life.  It has been 10 years this month that I sadly commemorate my mom’s passing to cancer but I’m also proudly celebrating a decade of fighting the disease that took her life.  In my eyes, cancer may have scored the first goal but we’re now in the second half and I’m fighting right back and winning!
Whether it is a soccer game or the fight against cancer, I’ve come to appreciate that over the years that winning is NOT always everything and my mom taught me that better than anyone.  My mom played the game of life in the most admirable way possible.  She played by the rules, lived life to its fullest, work hard and loved those around her.  For the 57 years she was here she left no regrets.  She raised a family and instilled values in those she touched that will live indefinitely.  Her battle with cancer was no different – she tackled it head on with respect, grace, determination and never let it invade her soul.  Cancer is a ruthless, uninvited, deceitful, rude, and cheating opponent but it is an opponent that can be beat over time.  It doesn’t follow any rules and it will continue to invade all of our lives.  It doesn’t care who you are, who you love or what you have to live for – it cheats and steals until it feels it has been victorious.
What Cancer doesn’t know is for every person it goes up against, there is a team full of family and friends supporting that person that are ready and able to FIGHT back.  Although she is no longer physically with us, my mom is very much still in the fight.  She left behind a legacy of family and friends that will fight on.  She is most likely sitting back smiling now because cancer picked the wrong fight.
So what does this all mean for you and me?  The next time you embark on your next journey, competition, challenge – just give this some thought.  What does “winning” mean to you?  Is it the place you cross the finish line, the score of the game, your rank amongst the group?  Don’t get me wrong, how you perform has its place in this world and I’m the first person trying to win - BUT I can’t emphasize enough the importance of evaluating yourself and others on the how we “played the game”.  We’re not going to win or be successful in everything we do.  Persistence and perspective are so critically important.  Win, lose or draw – we need to be able to be proud of the performance we gave and be able to pick ourselves up, dust ourselves off and move on to the next challenge.
The next time you “step up to the starting line” or walk into the board room, ask yourself:  Did I give 100%?  Was my effort part of a larger and longer lasting effort that will have greater change?  Did my individual efforts help impact others?  Am I proud of how I conducting myself?
Winning might be a great feeling for you temporarily – but is it ALSO changing the world around you?  As the cliché saying goes – “Make your mom proud”.  It’s all in how you FIGHT that really counts! 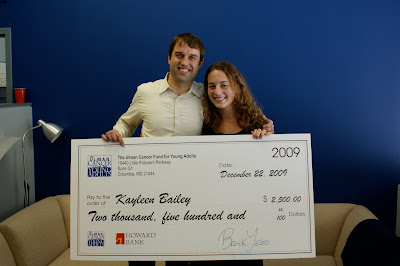