BRAIN CANCER at 22 years old? Does this really happen? Not only does it happen it happened to me. March, 2004 my world came to a screeching halt. I began having severe pain on the back left side of my head and became increasingly dizzy. After being misdiagnosed 3 times, I had an MRI that showed the orange sized tumor rapidly growing on the back of my brain.

I was immediately rushed to the hospital. On Sunday, May 21st, 2004 I had a successful 7 ½ hour brain surgery removing the entire tumor. I was in the Intensive Care Unit for 2 weeks following surgery. Doctors told me there was a less than 5% chance the tumor was cancerous. A week and a half later I was given the devastating news. I had cancer!

Because the type of cancer I had, Medulloblastoma, is most commonly found in children I was referred to a doctor at Children’s Hospital in Washington, D.C. There, I was treated by the guru of Medulloblastoma’s and a wonderful team of Pediatric Oncologists. Along with my neurosurgeon, they are the reason I am alive and doing so well today. I was given a plan of action and began cranial/spinal radiation shortly there after. Radiation is the most important key in fighting this type of cancer in adults, but it took a huge toll on my body. I was nauseous and tired all of the time. I lost all of my hair. I stayed with my parents during treatment and visited my husband of 1 ½ years on the weekends. We had just moved into our new house a week prior to my surgery and I was always happy to go home!

Radiation therapy does not take long (about a minute). For me, that minute was pure hell and seemed like forever. I would lie on my stomach with my head clamped into a device that should only be used on criminals as a form of torture. Three weeks into radiation I developed appendicitis and had surgery to remove my appendix. As a result, this delayed radiation a week and sent my doctor’s into a tailspin. Radiation is never supposed to be interrupted…especially for an entire week. Chemotherapy was an option, but, to me, the risks outweighed the benefits. I declined chemo treatment.

The vast amount of radiation I received has caused problems that I still battle to this day. About three years after treatment was completed I developed cataracts in both eyes. They grew very quickly, so I had surgery to remove them. The spinal radiation caused my stomach to become paralyzed, so this makes it very hard for me to digest food. I take medicine that helps, but I have to be very careful with what I eat. To me, these are just minor problems that are under control and I’m thankful to live a relatively “normal” life. 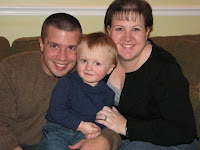 I will be five years cancer free this May! I was told after my treatment that I would never have children. My son turns 2 in June. I’ve learned that doctors are great in many ways, but they do not know everything. Having an unwavering faith, supportive husband and family is the reason I am as strong as I am today. I am truly lucky to be alive and I am thankful that I’m able to be a part of an organization as wonderful as the Ulman Cancer Fund. I felt very isolated going through cancer at 22 years old. As a result, my goal is to work with the Ulman Cancer Fund to be a friend and advocate for as many young adult cancer patients and survivors as I can.

Posted by Ulman Cancer Fund at 9:57 AM No comments:

Best said by Doug Ulman and echoed in a recent blog by Laurel Wassner, “if he could just inspire or help one person in some way, then he'd be happy.” As I reflect on Young Adult Cancer Awareness week, I am trying to understand how I “fit” into the bigger picture. I thankfully have not had to personally fight this dreaded disease, but have met many amazing people in the last few months that stare cancer in the face every day and every minute. I wonder how I would fight. How I would deal with cancer?
I am truly inspired by those I have met who are fighting, each in their own way. I have made some great friendships that have truly opened my eyes as to what living really is about. When I embarked on this new journey with the Ulman Cancer Fund, I truly had no idea what I was getting into other than I knew it “felt” right and I am still not sure what that means.
We are making great progress here in these very tough economic times. We are forging ahead with a renewed strength and focus on our mission. New relationships are being built and old relationships are being strengthened. New faces have been brought on board and familiar faces have stepped up to new levels.
So, where does Brian fit in? HERE! As Doug and Laurel reminded me, if I can make one person’s life a little better, a little easier, isn’t that what it is all about? As I was sitting with a new friend yesterday, who happens to be a survivor, watching her 4 month old smiling and bouncing on her leg, I realized that I am seeing things in a new light. Thanks Sylvia! I am trying not to take for granted what I have in my life. A great family and great friends are not givens in everyone’s life. I am thankful for what I have been blessed to have and appreciate it more than ever.
As time moves on in this journey, I can’t imagine what is in store for the future, but I promise you I will do my best to help more people and have a positive impact in the community in which my daughters will grow up.
So I look to the fighters and I smile. I look at the picture above of my friend Laurel who is always smiling as she competes in events that challenge her physical ability. I want to thank them all for helping me understand where I fit in!
Be good and smile!
Brian
UCF Assistant Director
Posted by Ulman Cancer Fund at 1:09 PM No comments: