The UCF Blog has MOVED!

You can now find the UCF blog on HERE!
Posted by Ulman Cancer Fund at 4:58 PM No comments:

The Ulman Cancer Fund for Young Adults has a long history with Volunteer Maryland whose mission is to build stronger and healthier communities by empowering Marylanders to take action. The UCF received it's first Volunteer Maryland Coordinator in 2002. Ashley will be working on the Peer Mentor Program, University Outreach and creating Ambassadors of the UCF in Baltimore. Now, we welcome Ashley Portrey to our team. Here is a little bit more about Ashley, in her own words... 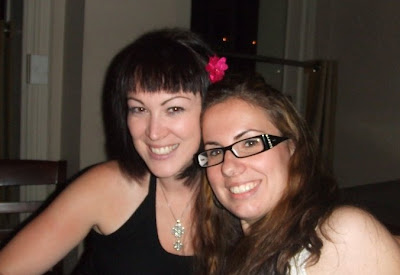 "I am a graduate of Shepherd University with a BA in psychology. I am currently in a Masters program at Hood College. I am studying Thanatology, which is the study of death dying and bereavement counseling. Specifically, I want to use my degree as a way to help those going through times of bereavement. I want to help those who are faced with a harsh diagnosis to those individuals who are at the end of their fight. I want to be a support to the family members as well.  I came to UCF because the mission is something very close to my heart. I am very aware of what cancer can do to a person and to a family. People need support, they need education, and they need to be connected with others who are going through the same fight. My family has been riddled with cancer. My grandfather died of lung cancer, two of my aunts and one cousin died of breast cancer, one of my best friends died at 22 with stomach cancer, and my mom is a two time survivor of cervical cancer and melanoma.  I am a cancer survivor. I was diagnosed with ovarian cancer when I was 23 years old. I was given amazing support from my family but I would have loved to have known about UCF. I know that educating the community about cancer in young adults is important. I am very excited to begin my year with UCF."
Posted by Ulman Cancer Fund at 2:35 PM No comments:

As the office tries to regain balance after the excitement of Half Full, the final Team Fight event of the season is also sneaking up on us. There will be a whopping 53 Team Fight members participating in The Baltimore Running Festival; 21 of them competing in the half marathon.

Something unique about the Baltimore Running Festival, as an Ulman Cancer Fund event, will be the presence of the Cancer to 5K Program.  Baltimore Running Festival is the culmination of the 12-week training program.  There will be 14 Cancer to 5K champions completing their end goal of the program: a 5K. Because of a partnership with Mady & Mules the UCF was able to bring the Cancer to 5K program to Howard County for the first time.
There is a sense of deep, deep pride affiliated with the Cancer to 5K Program unlike any other. Being witness to the physical success of these individuals can be very emotional. Cancer to 5K is about completing a race, but most important it is about regaining strength and power. The camaraderie of the group is like the bond of a new family.
In the lingering energy and spirit of Half Full, I encourage all participants and spectators to take photos, videos and capture comments of your experience on race day! What makes you Half Full? Share your story with us at: http://www.halffulltri.r2ismash.com/
I’m wishing all the Cancer to 5K crew a wonderful race. I can’t wait to cheer you on…
Sarah Wainio
Program Coordinator, Mission Engagement

Posted by Ulman Cancer Fund at 10:04 AM No comments: 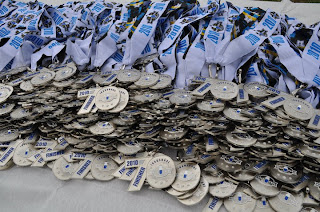 Just days after the inaugural Half Full Triathlon and I'm still overcome with emotion from the overwhelming amount of support I witnessed from volunteers, sponsors, spectators and participants. To everyone involved with making this event a success and being a part of our Half Full movement - THANK YOU! To all the athletes that participated in the event - congratulations! Half Full was a success for the Ulman Cancer Fund for Young Adults for many reasons. Some of the ones that stuck out to me were:

Yes, we also raised funds that are critical to sustaining and enhancing our programs for young adults and families facing cancer, like patient navigation, college scholarships and peer support, but I'm just personally blown away by the impact we can have as a community when we simply come together and take a half full approach to fighting this disease.

Half Full began as a vision some 18 months ago, between a small group of people. It has grown to include all of YOU. Half Full was truly an effort of the masses and the numbers behind the field tell the story... 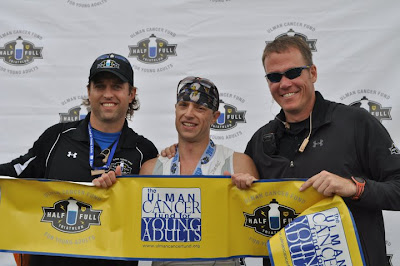 As we close the the door on the 2010 Half Full Triathlon we open up the door to the boundless opportunity of 2011 and beyond. Half Full may have started as a 70 mile triathlon, but I'm getting the feeling it's a lot more than that to many people. So buckle up folks and hang on - the Ulman Cancer Fund for Yuong Adults is excited to keep this bus moving and we're hopeful you will stick around and recruit more family and friends to join us!

In addition, I would like to share a blog written by Nicole Kelleher, 2010 NCAA Triathlon Champion and the Ulman Cancer Fund for Young Adults Scholarship Recipient:

This weekend I had the honor of participating in truly the most special event I have ever taken part in. The inaugural Half Full Triathlon drew over a 1000 participants and 400 volunteers (do the ratio on that!) this past Sunday in Columbia Maryland to raise support and awareness for young adults battling cancer. I can guarantee that there has never been a more impressive inaugural event. Headlining the event were Rebecca and Laurel Wassner (the only pro triathlete who has beaten cancer) as well as Eric Shanteau (also a cancer survivor, 2008 Olympian and American Record Holder in the 200m breast stroke) and Doug Ulman (the CEO of Livestrong). This event was run by the Ulman Cancer Fund, a young adult alliance organization with Livestrong, and 100% of race registration went directly to their cause of advocating for and supporting the largely marginalized and under-served population of cancer patients that are young adults in this country.

The Triathlon itself cannot be captured through words on paper. From the incredible major media coverage, the nicest most helpful volunteers on the planet!, amazing gift bag, impressive expo, free Chipotle, free McDonalds, free lace locks, Oakley raffles ect, ect ,ect It had EVERYTHING and even more that you would find at the largest, most well-know triathlon in the country. This event has obviously inspired major support from all directions. This is going to be a HUGE event in the future and an important movement in the triathlon world. The distance was a 70 mile race with a .9mile swim, 56 mile bike and 13.1 run. The distance is significant in that it represents the 70,000 young adults diagnosed with cancer in the US each year. What I really want to talk about is exactly what that means at this race and why this race is different.


I woke up Sunday morning looking forward to helping my relay team with the swim portion of the race, but I was mostly excited because I knew I was about to witness triathlon in a new light. I was right about that. The swim was gorgeous, pancake flat, smooth water. And our relay team won the relay division as well as had the fastest overall time of the day- owing not at all to my swim but by an insane 1:17 half marathon by James Linville and an impressive bike by Scott McAims. And 3 of the top 5 relay teams were from UVA (out of 100 relays!). So UVA had an incredible day. But what was different about the race had nothing to do with the performances of just that day.


Standing at the finish line I witnessed cancer survivor after cancer survivor cross under the large finishing banner, past the photographers, announcers and TV cameras. Most of them would stumble a little after the line as they dropped their faces into their hands and started to weep. These were often very young people. And even more often, these were people that had never done a triathlon before and now had just completed a 70 mile race after battling cancer. Could they have ever imagined being in the finishers ring of such an event the months or years before when they sat in a stark hospital room with a line of chemotherapy streaming into their veins or confronted their mortality in quiet hours alone somewhere – all at such an unimaginably young age? Looking around, people all along the course carried signs with photos and memories of loved ones lost too early- and yet there was hope there too. I was not the only one that noticed. The event was permeated with a hope that cannot be destroyed. Everyone felt it together.


This is one of too many examples to cite during this sacred day. To recommend this race like I have others would not be doing the event justice. This is a race for anyone who has ever doubted that triathlon could change the world or anyone who wants to witness what that change looks like in full display. I hadn’t ever seen it before; but now I have- and I know now that this sport is much bigger than I realized. 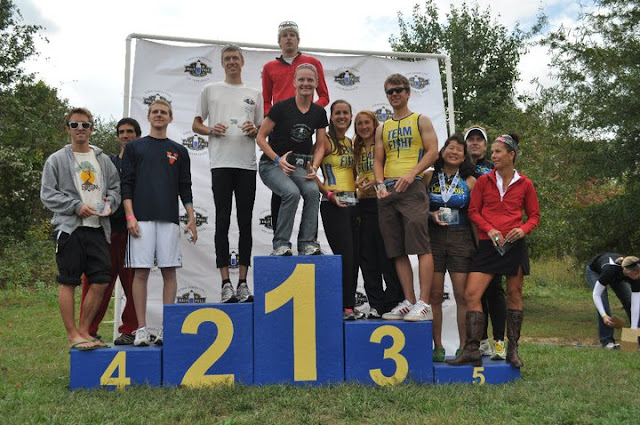 Nicole Kelleher and her Half Full friends, first place relay team!﻿
Posted by Ulman Cancer Fund at 5:53 PM No comments:

Be a part of Half Full Triathlon! 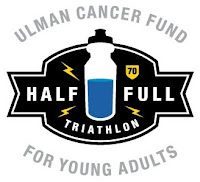 Half Full Triathlon is more than just a race. Half Full is about a fight. It’s about people. It’s about stories. The Ulman Cancer Fund for Young Adults (UCF) wants to know what has brought you to participate in this 70-mile fight representing the 70,000 young adults diagnosed with cancer each year. What got you to the starting line?
There are many ways to share your story; blog, make videos, take photos, even Tweet!  The UCF is partnering with R2integrated to create the ultimate social media mash-up from the Half Full experience: the Smash Page. Your stories make this event what it is; we encourage you to share them.
How to share your story and be a part of the fight:
Ø       >Tweet it - #halffulltri
Ø       >Photograph it – email to halffulltri@r2ismash.com
Ø       >Blog it – tag halffulltri
Ø       >Capture it on film – upload to YouTube and tag halffulltri
Make sure to use the tag halffulltri when uploading to FlickR, YouTube, Facebook, Twitter or your blog! All of your content will be streamlined to the Smash Page.
Be a part of the hype! Check it out:
www.halffulltri.r2ismash.com
@halffulltri
@ulmancancerfnd
Posted by Ulman Cancer Fund at 4:53 PM 1 comment: