LIVESTRONG: A Podcast Series for Young Adults with Cancer

Hear the experiences and advice of peers — including many of you!

Each podcast is 5 – 7 minutes long and addresses the unique needs of young adults with cancer.

In the FIght, Together.

“You hear and you forget. You see and you remember. You do and you understand.”
- Confucius

That saying has never been more fitting that what I witnessed this past week. I witnessed people all across the country (and Canada) joining hands in the fight against cancer. I’m always amazed at what can be accomplished when groups of people put their hearts and minds together and put the needs of others ahead of there own. From Canada to Maryland to Portland – we saw people making a sacrifice to help those in need. That’s what this organization is all about!

I had the pleasure of traveling to Halifax, Nova Scotia on Wednesday with our Founder Doug Ulman to attend a fundraiser event for the Tony Griffin Foundation . Tony Griffin is a world class hurler from Ireland who put his career on hold last year to ride his bike across Canada and Ireland to raise money to help fight cancer. Tony lost his father to lung cancer in 2005 (a non-smoker his entire life) and made a commitment to do something about it! On October 14, a crew of some 72 crazy Canadians will be riding their bikes from Nova Scotia to Austin, TX. 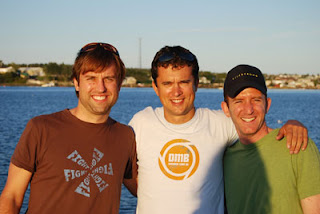 On Sunday I supported the 32 members of our Team FIGHT participating in the Aflac Iron Girl Columbia Triathlon. Many first timer’s on our team, everyone rose to the occasion and were declared Iron Girl’s as they crossed the finish line. We had college students, mothers, 1st timers, pro triathletes, bankers, oncology professionals - our team consisted of women from all walks of life coming together for one common bond – to raise money to support young adults fighting cancer. For the third straight year, we had a group of 12 young adults participating in the Nike Hood to Coast Relay. Joining 12,000 other runners, Team Run Stonger ran 195 miles from the base of Mt. Hood to the Coast of Portland. Enduring 24 hours of aches, pains and sleeping in vans (I know first hand as I did this last year), our team raised over $15,000 to support young adults fighting cancer.

Thanks to all who made the sacrifices to help those in need – they ran that extra loop, cycled that additional mile, swam 800 meters longer. They did what they had to do to succeed in an event that would be both life changing for themselves while also impactful on the lives of others.

Posted by Ulman Cancer Fund at 8:51 AM No comments: