The blog where Katrina runs for Team Fight in ANOTHER COUNTRY... 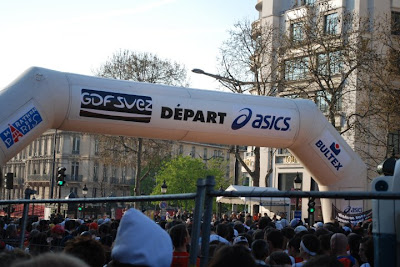 It was precisely 6:30am on Sunday April 11th as the alarm began to wake us up for our marathon pre-race fueling breakfast… my favorite with a French twist: a French whole grain baguette with peanut butter and bananas.  Delicious.

As we rolled out of bed it was time to get our race gear in order:
Team Fight Jersey: check
Body Glide (everywhere!): check
Race belt armed with our numbers, GU and plenty of Clif Shots: check
Socks, visor and sunglasses: check
Running shoes: check
Riding the metro to the starting line at the Arc de Triomphe, it was obvious from looking at the other passengers that this was race day in Paris.  Upon arrival, we had the traditional “final” bathroom break (runners you know what I mean), picture in our Team Fight jerseys in front of the Arc, warm-up and stretch before the “official start time” of 8:45am.
With nearly 40,000 runners participating in the Paris Marathon, you can imagine the mob of people packing the street down the Champs-Elysée.  This also explains why it took us nearly 15 minutes to cross the starting line. Just enough time for one last bathroom break.  We finally stepped on the first time pad, our timing chips had started. Only 26.2 miles stood between us and the finish line.
***WAIT A MINUTE!  HOLD UP!  We are running the Paris Marathon?!?!?  How the heck did we get here???***

Flash back to October 2009 during a weekly Skype conversation in the McGowan household.  These had become a regular thing since my brother, John, had left the US of A to go teach English in Montpellier, a town in the South of France.  Always having been runners and having completed a handful of races together, we had our sights set on a marathon.  Never did we plan on doing the Paris Marathon; that is until John realized the race was at the beginning of his April break- the week I was planning on coming to visit!
It didn't take much convincing, next thing we knew we were both registering online for the race.  Training plans were put together soon after. We began that December.  The 18-week program included a healthy mix of long and longer runs, speed work, recovery runs, and “short” runs.
Both John and I had our ups, downs, ins and outs throughout training.  I had never run more than 16 miles so when 10 or 12 miles was a “light day,” it took a little getting used to.  For John, the biggest surprise (and relief) was that injury did not spell certain doom for the fate of the race.  As with many runners training for a long distance race, shin splints were often a problem.  However, the time taken off from road training and put into rest and cross training ensured he was still in good form for race day.
Since the beginning of our training, we had set goals for our marathon performances.  Something we soon learned (as first time marathoners) was that setting the right goals was just as important as setting them at all.  Having your eye on a specific split or finish time is useful, but more important is enjoying and appreciating the experience.  As Aerosmith said, “Life’s a journey, not a destination.”  Those 26.2 miles won’t mean nearly as much if you can’t take it all in and appreciate the hard work you’ve put in to make it happen.
***FLASH FORWARD – April 11th, race day at the start line.** 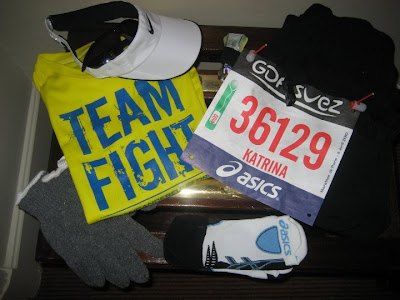 We finally crossed the start line on the Champs-Elysée. The sound of Black Eyed Peas “I Gotta Feelin’” started to fade and we were officially off!  In keeping with our theme, our eyes were constantly wandering as we ran through the streets of Paris, enjoying everything the race had to offer.  There were so many, but I will share our top 5:
1.  We don’t remember running by Moulin Rouge, but…For pretty much the entire race, streets were lined with supporters and spectators. Our absolute favorite came around 10am at mile 7ish.  It was a mother and her (very) young daughter.  Both were dressed in sexy black and pink lingerie drinking (lots) of champagne; yes both.  We think the mom was giving her best attempt at a kick-line, but the jury is still out.
2.     2. Running of the Bulls?  In Paris? Toward mid-race, the course had runners following the edge of the Seine River that cuts through the heart of Paris.  As such, there were several times we ran through underground tunnels.  In every tunnel, someone would always start a call and response chant to keep morale up.  We felt like we were Running with the Bulls, but inevitably, as if on cue, us and the rest of the runners in the tunnel would join in on the response.
3.     3. How Parisian?!  Every 5k, the race organizers provided water and fuel.  An unofficial refreshment stop came later at mile 23 with a small table serving cups of red wine.  To no surprise, there was a crowd of runners that had stopped to enjoy their glass/cup before restarting and heading to the finish line.
4.     4. Now that’s what you call love.  As we pulled around the final curve, the finish line was in our sights!  But what kept us distracted (and entertained) was an overzealous husband who was literally dragging his wife by the arm to the finish line.  Apparently they were set on finishing together, no matter what!
5.     5. GO TEAM FIGHT!  Last but not least was the support that we felt throughout the race.  We have both done races at home (USA) in our Team Fight gear, and constantly heard the cheers that come from the crowd.  But to hear people from all different nationalities with different accents yelling “Go Team Fight” is a pretty cool thing. 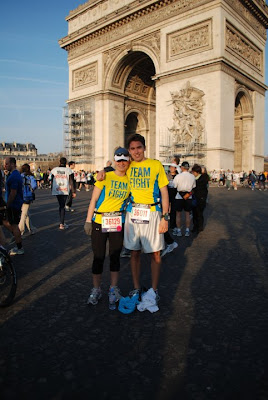 Looking back at the entire experience and finally crossing that finish line in Paris 3 hours 52 minutes and 33 seconds later, we are both happy to say that we have no regrets about how we attacked or finished it!  There’s definitely lots of room to improve for our next one (and yes there will be a next one), but having this experience in the books won’t be something that we will soon forget!
Katrina McGowan,
Team Fight Program Coordinator
and
John McGowan
Team Fight Member
Posted by Ulman Cancer Fund at 6:01 PM 1 comment: